The Earthquake and its Aftermath: Three Personal Accounts

Jean Elie Gilles and his wife were at their home in Rue Dalencourt in Canapé Vert on Jan. 12, 2010.  When the earth shook, Jean Elie believed that a truck had driven through his house.

“Moments later, I heard my niece bellowing ‘Papi, papi, help me’– then I realized that one large portion of the apartment had collapsed.  I hurried and was able to remove her from the rubble. I took both my wife and niece outside of the building and reentered to search for Papouche, a security guard, who was also in the building.

“Upon entering the building, I screamed his name several times.  Suddenly I hear ‘Jean, Jean, I am dying.’ I asked him where he was and I see him buried under cement beams.  I knew I needed help, so I told him ‘Papouche tell yourself that as long as Jean Elie is alive, he will not let you die.’  He told me to hurry. I went outside and saw a man in the streets, I ask, please lend me a hand in removing a young man dying under a beam, he hesitated, but went in with me and we were able to save the security guard.  As we emerged from the building, I asked a street merchant with a bunch of pants on his arm, to give me a pair of pants for the security guard who was naked since he had been in the shower when the sinister quake happened, he was so generous, he told to take as many as I wanted.  During the earthquake, I saw how much generosity the people of Haiti have in their heart.”

On January 14, Jean Elie and the three other people living with him traveled to Jacmel, his hometown.  “When we arrived everything was fine but Jacmel was devastated. The historic district was destroyed,” he said.

“I didn’t speak to a professional, but it took me a year to get the sensation of the earthquake out of my body.  Since I was standing when it happened, anytime I laid down my body was swaying, just like during the moment when it happened.

“Though with time I have healed myself from the trauma, believing that where I was, I should have died.  I was given a chance to ‘be saved to serve’! And that is what I will be doing for the rest of my life.”

Polyanna Dommond was driving her car on her way home to a birthday party she organized to celebrate her nephew’s birthday when the quake struck.  She was in Bourdon and watched as houses and buildings tumbled right before her eyes. The road was totally impassable, so she walked from Bourdon to Tor.  As she made the journey, she saw so many cadavers, blood all over the streets, injured, and heard cries from the rubble. “It was catastrophic,” she said.

She sensed that her home had also tumbled, and upon her arrival, she found her mother’s four-story home totally destroyed.  Her mother survived with a broken foot, her nephew’s feet were broken, and her cousin suffered a severe head injury. However, her 11-year-old son, five nephews, one cousin, as well as other family members and friends were not as fortunate.  In approximately 35 seconds, 20 people she loved had perished. “With the help of volunteers, we unearthed them. I buried my son and four nephews in my father’s grave and the others wherever we could.”

Polyanna didn’t seek professional help to deal with her grief.  She assumed the helm of the Dikini camp and stated that “speaking with others and volunteering and doing what I could to be of service was my therapy.”  It is still very painful for Polyanna to speak about the earthquake.

Marc Alain Boucicault had to make the long trek from his office in Pétion-Ville to his home in La Plaine by foot.  Fresh out of college, Marc Alain was working for the World Bank at their office very close to the Montana Hotel.

“I was pulling extra hours, as this was my first job, working really hard when the earthquake hit.  Hotel Montana, located right behind our office, was destroyed. Unable to go home, I had to spend the night at the office.  My family was not in Haiti, and luckily, I was able to find a satellite phone at the World Bank and called them so they would not worry.

“What I did not know was that our cook was stressed.  My family knew that I was safe but she did not. The day after the quake I started walking to get to my house.  Halfway there, I stopped at a friend’s house and slept and continued the next day. So when I got home she was crying, she jumped and hugged me for the very first time and said ‘I thought you were dead.’  I gave her everything that I had.”

A few days later, the World Bank evacuated its local staff to the Dominican Republic and Marc Alain started working remotely from there. Later, he studied in Washington, D.C. and returned to Haiti in 2015, and brought the concept of co-working space home to Haiti.  Eventually, he launched a company.

“Banj is a brand for the country, for young people to be able to identify with positive people, growth, and technology.  Banj is not only a co-working space, it has evolved and now as an accelerator program – from youth leadership to business acceleration.” 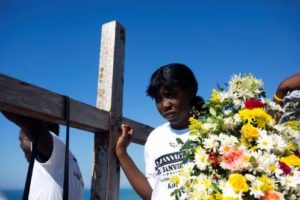 3 COMMENTS ON THIS POST To “The Earthquake and its Aftermath: Three Personal Accounts”