Over 4.5 million Haitians, almost half of the population, will be in need of humanitarian assistance in 2020, the United Nations warned.

Haiti celebrated Wednesday its 216th independence day in the midst of political turmoil and a profound social and economic crisis.

The government of President Jovenel Moise has been facing nationwide protests calling for its removal after scandals emerged involving the head of state along with other officials in cases of severe corruption, and after fuel shortages, dwindling food supplies, and mismanagement of public funds further plunged the impoverished country in one of its worst economic and social crisis in years.

To mark the day of independence, Moise gave a speech and denounced graft, urging Haiti’s elite to work with the government.

Moise’s speech marked 216 years since the Caribbean nation gained its independence and became the world’s first black-led republic, forcing France to surrender its colonial rule over the slave-driven plantation formerly known as Saint-Domingue.

Led by Toussaint-Louverture, who declared the abolition of slavery, former slaves fought against France between 1791 and 1804 when General Jean-Jaques Dessalines finally defeated French forces and declared independence, reviving the island’s native name: Ayiti.

Haiti’s problems, however, which can be traced back a long way, have only been getting worse since its birth as a Republic.

The country has been fighting and struggling for more than two centuries to establish itself as a modern and stable state, but it has been mercilessly punished, used, and exploited by the West, making a sustained political, social and economic development almost impossible.

The island was, for instance, burdened with an illegitimate debt imposed by France in exchange for lifting a naval and diplomatic blockade. The former colonial power demanded that Haiti pay 150 million gold francs in “reparations” to former French slaveholders. According to several estimates, that was 10 times the country’s yearly revenue.

For over a century, Haiti was required to finance the debt, hampering the possibility to invest in infrastructure, social services, and industrial development.

It wasn’t until 1947 that Haiti was finally capable of paying compensation to slaveholders and human traffickers. By then, it had already suffered a 19-year-long occupation by the United States (1915 – 1934), during which racial inequalities were exacerbated. Continue reading 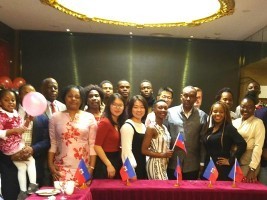