Former Haiti Ambassador Paul Altidor is working to change the narrative around Diaspora groups in the United States through his new position at MIT. During the Spring 2020 semester, Altidor will be teaching a course titled, “ (Re)engineering Planning and Diaspora Groups .” The course will focus primarily on second and third generation Diaspora groups and how they can act as “catalysts for sustainable growth and economic prosperity in communities both in the United States and within the developing world.”

While there’s an abundance of research on foreign-born immigrants and their contribution to their home countries, there’s growing interest from planners, policy makers, development economists and others on U.S.-born citizens with no direct link to their parents’ or grandparents’ country of origin.

“I intend to expose the students to some of the current thinking in leveraging the power of diaspora groups as catalysts of growth in communities both in the U.S. and the developing world,” Altidor said in an interview with MIT. “Whether as a diplomat, as a development practitioner or as an advisor to governments, I have been exposed to this topic from many different perspectives. Given the continuous movement of people across borders, this topic will continue to be of significant importance to the planning and policy making community. “

In May 2012, Altidor assumed the position of Ambassador Plenipotentiary & Extraordinary of Haiti to the White House. Prior to his role as ambassador, Altidor, also an MIT alumnus, worked for the International Finance Corporation (IFC), the private arm of the World Bank Group and also served as vice-president of the Clinton Bush Haiti Fund.

“I came to the United States as an immigrant. The narrative of the immigrant experience and immigration process are deeply personal to my own identity,” he said. “Despite, or maybe due to, evidence that migration will continue to increase in the near future, the current narrative permeating the public dialogue around immigration in the US is largely negative. Through my class this coming term, I will endeavor to recruit allies at MIT to document the benefits, both to their new home and to their country of origin, of immigrants – allowing us to provide context for a new, positive narrative around immigration. 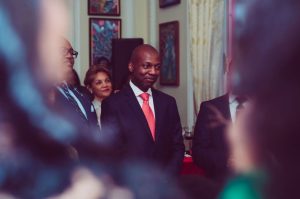