On Oct. 29, The Haitian Times celebrated its 20th year anniversary with a reception at Brooklyn Borough Hall, where a number of community leaders and elected officials joined in on commemorating the publication’s commitment to community news and the Haitian Diaspora.

“In 1999, when the paper was founded, New York’s Haitian community faced many of the same problems it faces now — a lack of affordable housing, access to quality health care and jobs,” André said.  “However, over the last two decades, we’ve also seen the community make great strides professionally and politically.

“In that time, The Haitian Times has also grown, tripling its readership and expanding its reach to include readers from New York to Hong Kong,” she said. “Our readers trust and rely on The Haitian Times for information and analysis on the community’s most pressing issues.”

The Haitian Times was founded as an English-language weekly newspaper with distribution mainly in New York, South Florida and Haiti. However, when the publication transitioned to an online-only outlet in 2012, it opened the doors to a wider audience and reach that it didn’t have access to before.

André’s expertise in online journalism and branding was crucial in the years following the publication’s initial shift to digital. She redesigned and re-launched the news site and focused on strengthening relationships with key organizations and leaders in the community.  With a new editorial strategy in place to increase readership, André hit the ground running prioritizing recruiting talented reporters.

Under her leadership, The Haitian Times more than tripled its audience and expanded coverage to include international Diaspora communities in France, Mexico and South America.

“What began as a personal dream, has become a leading institution guiding Haitian-American communities across the country as we continue to make inroads to become a strong, savvy and sophisticated member of our adopted land,” said Pierre-Pierre. “Since its first edition hit the newsstands on that fateful date, The Haitian Times has cheered, cajoled and challenged the community when it deemed necessary.

“We’ve remained true to our mission of bridging the gap – be it geographical, generational or social – by providing thoughtful and insightful reporting, explaining the issues facing us here and in our beloved, but troubled homeland,” said the former Sun-Sentinel and New York Times reporter.

The Haitian Times has been recognized as a pioneering example of ethnic media and community journalism.  In fact, Pierre-Pierre co-founded The Center for Community and Ethnic Media, a research, training and professional support center for community and ethnic publications in New York City.

“The Haitian Times is more than just an online news source,” Peck, whose organization HCC co-sponsored the reception, said. “It has become a bridge between Haiti and the rest of the world for its readers. It’s important as a community that we continue to support one of the most trusted sources of news for our community and are unapologetic about how they report the news.”

“I’m incredibly proud of what we’ve accomplished over the last 20 years and am excited for what’s to come,” André said. “None of this would be possible without the dedication and hard work of our reporters and staff who go above and beyond to ensure our stories are being covered and shared in the way they deserve to be.

“We could not have done it without the support of our readers, advertisers and staff. Here’s to the next 20 years.” 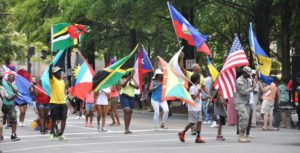