Their participation in the parade this year marks the first time in years a costumed Haitian band appeared in the parade. 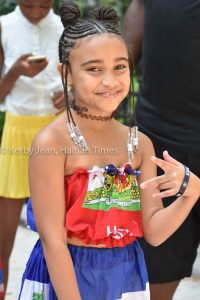