WASHINGTON/PORT AU PRINCE, HAITI – Tempers flared in Haiti’s parliament Tuesday as lawmakers resorted to pushing and shoving each other and swearing to vent frustrations over an act of vandalism that stunned the nation in the early hours of the morning.

A group of opposition lawmakers threw chairs, desks, papers — anything they could find — on the lower chamber’s floor and doused some items with oil in an attempt to block a scheduled vote on Prime Minister nominee Fritz William Michel and his Cabinet.

“Get out! Get out of here!” one lawmaker was caught on VOA Creole video screaming to an opposition lawmaker as a colleague grabbed him by the suit jacket and shoved him aside. The opposition deputy, Deus Deronneth, responded by laughing while others screamed insults at each other.

Haiti has been without a prime minister since March, when Jean Henry Ceant was forced to resign after a no-confidence vote, leaving the country’s political and financial affairs in limbo. President Jovenel Moise has repeatedly called on lawmakers to move forward on his subsequent nominees.

In response, the opposition has used various tactics to block the process. They have succeeded in halting the process until now.

“We acted this morning to prevent the ratification process of the new government from happening, because the motivation of the majority (party) lawmakers is not a legitimate one (in our view),” Deputy Deronneth, who represents the southern district of Marigot, told VOA Creole.

“This saddens me. It’s not what I expected when I ran for office,” Deputy Jean Michel Moise, who represents the northwestern region of Bonbardopolis-Baie-de-Henne, told VOA. “This behavior is unacceptable for a deputy. When you destroy property as a member of parliament, that’s not democracy. You are entitled to your opinion, but others may see things differently. And when you lose, you have to accept defeat. I consider this to be an act of total delinquency.”

Deputy Jacques Beauvil, who represents Carrefour, a suburb of the capital to the south, said the country’s problems weigh on everyone.

“They have existed for as long as we can remember. But today the problem is much worse — people can’t buy gas to get to work, vendors can’t get to market because of rampant crime — these problems affect me and they frustrate me too but I disagree with the way the guys (colleagues) expressed their displeasure by breaking and shattering things — by the way, we already don’t have much when you finish destroying the furniture — if you’re not re-elected, where will the new deputies sit?”

Residents of Port-au-Prince expressed mixed views for the opposition’s actions.

“What the (opposition) guys did today is a victory, in my opinion,” a young man standing near the national palace told VOA Creole.” Because they stood by the people. The people understand very well the game Gary Bodeau is playing in the Chamber of Deputies. So we applaud the opposition because their task as members of the opposition is not easy.”

“This is one of the rare occasions where members of parliament decided to fight for the underprivileged and refused the demands of the bourgeoisie (Upper Class),” he said.

But a street vendor expressed disappointment.

“These guys don’t love the country. School is getting ready to reopen, our kids are going to school. We have a gasoline shortage now. They should have let the vote happen. We need them to approve the prime minister so we can regain some stability,” he said.

Another disapproving man described the lawmakers as thugs.

“They are a bunch of vagabonds. They should have come instead with valid arguments as to why the nomination should not be approved. Convince them with your words. If you need to resort to delinquency, that is unacceptable.”

In the end, Michel and his Cabinet were approved in a late-night vote of 76-0, three abstentions in the chamber of deputies, which has a total of 119 members. Lower chamber President Bodeau was happy with the result, despite the morning’s shenanigans. 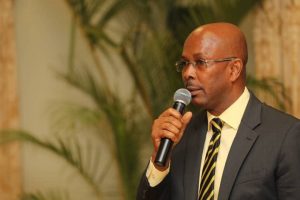