“Ambassador M. Sison supporting this corrupt government of Haiti is racist” were the words printed on posters held by protesters in front of the U.S. Embassy in Port-au-Prince.  The posters were also adorned with a collage of photos of the American president.

“We are here to tell Donald Trump we aren’t going to accept this from him [his administration],” a female protester told VOA Creole. “Come and get your thief [President Moise]. Gang leader Arnel Joseph has been arrested but until we see Jovenel Moise arrested you can’t tell us you’ve caught the [real] thieves.”

Moise has denied all allegations of wrongdoing and says he is not corrupt.

Since July 25, hundreds of protesters have gathered in front of the massive secure complex daily to express their disappointment and anger at the continuing U.S. support for President Moise.  Protesters deem their elected leader too corrupt to govern effectively. They want him to step down and be judged for his alleged crimes.

“Stop supporting corrupt leaders. If you are a true friend of Haiti you have to prove it,” a protester standing in front of the embassy said.

In an interview with VOA Tuesday, U.S. Chargé d’Affaires Robin Diallo responded to the criticism.

“Everybody has an opinion and democracy is being able to state that opinion in a non-violent way,” she said. “So as long as people are meeting, protests, demonstrating, that is part of a vibrant democracy. But any violence, destruction of property, that crosses the line.”

President Moise and two of his companies have been implicated in the PetroCaribe dossier for the alleged misuse of billions of dollars in revenue generated from an oil alliance Haiti signed with Venezuela.  The money had been earmarked for infrastructure projects, education and social programs.

In response to calls for his resignation, Moise has made repeated calls or a national, inclusive dialogue. Last week, he named a new prime minister, Fritz-William Michel, a 38 year old who is  a virtual unknown.  Michel’s proposed cabinet sparked criticism for being too “young” and won praise for including nine women.

“We are not a Republic of Dinosaurs,” opposition lawmaker Abel Descolines said. “A person’s age has no bearing on his / her performance.”  The deputy cited countries such as France, Austria and North Korea with leaders who took power in their 30s.

The prime minister nominee and his Cabinet have not yet been approved by the parliament because the opposition is insisting the PetroCaribe dossier be discussed first. Continue reading 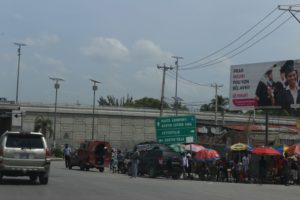 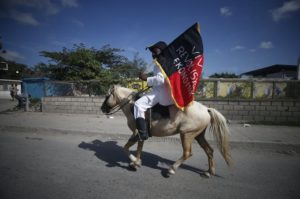