The United Nations Security Council on Friday renewed its justice-support peacekeeping mission in Haiti for a final six months, after which it will maintain only a special political mission in the crisis-ridden nation after Oct. 15.

Council members voted 13-0 in favor of the final six-month renewal, with the Russian Federation and Dominican Republic both abstaining. The Dominican Republic, which shares the island of Hispaniola with Haiti, called the withdrawal of peacekeepers in six months — as Haiti continues to face an ongoing political and economic crisis, deteriorating humanitarian conditions and State Department travel warning — premature.

“For the Dominican Republic [the peacekeeping mission] will come to an end at the same time we are expecting to see elections held in Haiti, a moment that can always fall into instability,” Ambassador José Singer Weisinger said. “We believe that we should weigh the moment and the conditions for this … The work of this Security Council is to ensure that there is… international peace.”

Haiti, which has a messy history with elections, is scheduled to hold legislative and local elections in October. Last week, during Security Council discussions on the situation in the country ahead of Friday’s vote, U.S. Acting Permanent Representative Jonathan Cohen stressed that the timing of the elections should not be a factor on when the peacekeeping mission ends.

“We do not believe this Council should link [the justice support peacekeeping mission’s] scheduled transition to legislative and local elections in Haiti scheduled for October 2019,“ Cohen said.

The United Nations first deployed a blue-helmeted peacekeeping force to Haiti in 2004, consisting of a large multinational military presence with soldiers from Brazil, Chile, Nepal and other nations. They steered Haiti through several hurricanes, tumultuous elections and a deadly 2010 earthquake.

In 2017, with a mixed legacy of controversy and stability, the Security Council began the withdrawal of the military soldiers but left foreign police officers to continue to provide support to the U.N.-trained Haiti National Police force. The smaller peacekeeping mission, which is now ending in October, focused on justice, human rights and police development.

In a brief statement on Friday, Cohen said the U.S. welcomes this final renewal of the peacekeeping mandate, and was mindful of the challenges ahead for Haiti. The country’s political actors, he added, need to engage in dialogue to find a lasting solution to the ongoing economic and political challenges.

Last month, following a series of tumultuous events including a 10-day lock down of the country in February by the opposition, the lower chamber of deputies fired the country’s prime minister, Jean Henry Céant, and his 21-member cabinet after only six months. The parliament has yet to vote on President Jovenel Moïse’s choice to replace Céant — former culture minister Jean Michel Lapin.

“This transition will mean a significant handover of responsibility into the hands of the Haitian government and its people,” Cohen said. “Now is the time for the government of Haiti to step up and assume its responsibility.”

For the most part, Security Council members have sought to provide a positive assessment of Haiti’s progress, with the United Nations’ help, over the last 15 years. Still, some nations remain nervous about what the lack of armed foreign police officers and armored vehicles may mean for the volatile country, which will now have to shoulder the burden of its own security.

“Haiti… has moved to a fully fledged political and economic crisis that has resulted since last July in a series of demonstrations and riots against the elevated cost of living, owing to inflation and the rapid depreciation of the local currency,” said European Union Ambassador João Vale de Almeida.

The country has seen more than 200 demonstrations since December, with protesters demanding the resignation of the president and denouncing the management of PetroCaribe, Venezuela’s discounted oil program with Haiti, in which the savings were supposed to be invested in social programs.

“The EU is concerned about the general situation in Haiti, “ Vale de Almeida said, adding that he worries about the ability of the Haiti National Police to conduct effective operations after peacekeepers’ withdrawal. “The persistent inability of the Haitian National Police and national authorities to control gang-related violence, with accusations of collusion and other dysfunctions, is of particular concern.” Continue reading 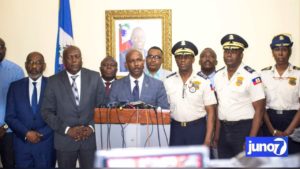