As Haitians throughout the country seethe with rage over Jovenel Moise’s blatant corruption, gross mismanagement and numerous scandals, the neo-Duvalier era in Haiti that has largely been orchestrated by the U.S. is now in danger of finally falling apart.

ORT-AU-PRINCE, HAITI – Throughout recent Latin American history, it is hard to find a country that has been as thoroughly manipulated and plundered by the United States as Haiti has. After over a century of U.S. intervention — from the 19-year-long U.S. military occupation that began in 1915 to the 2010 election rigged by the Hillary Clinton-run State Department — Haiti has become the ultimate neoliberal experiment that has forced its people to live in conditions so horrible that rivers of sewage often run through the city streets.

Even Haiti’s own president, Jovenel Moise — who has presided over the most recent phase of U.S.-backed plunder — recently called the entire country a “latrine.”

Yet — much as in 1791, when Haiti was the site of the first successful slave revolt in the Americas — today the people of Haiti seem to have finally had enough of being slaves in all but name and are taking to the streets en masse in an effort to end the rule of the Haitian Bald-Headed Party (PHTK), the U.S.-backed political party with close ties to the Clintons.

For six days, thousands of Haitians have marched through the country’s capital of Port-au-Prince and other major cities, calling for Moise’s ouster for corruption and gross economic mismanagement in recent years, much of which can be traced directly back to the 2010 earthquake and the subsequent U.S.-UN “relief” effort that let to rigged elections, caused a deadly cholera outbreak and sought to turnthe entire country into one massive sweatshop for American clothing companies.

More specifically, Moise has ignited popular ire after being implicated in the embezzlement of a $4 billion loan given to the Haitian government to develop the country via Venezuela’s PetroCaribe program and for his failure to combat the double-digit inflation that has further impoverished the Caribbean nation. 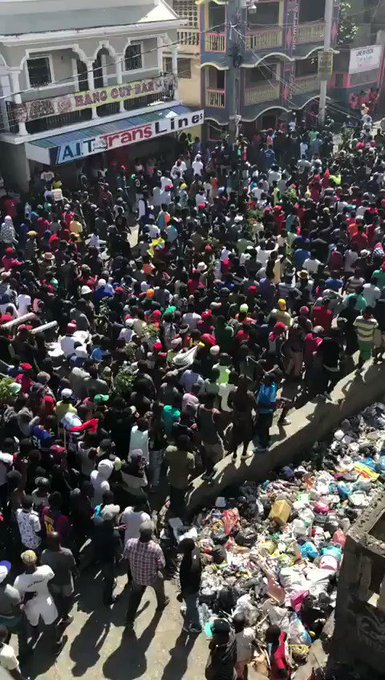 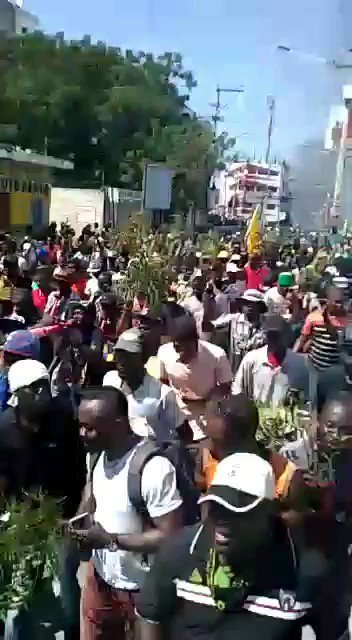 In the thick of anti-govt corruption protests in PAP, #Haiti today.

President Moise has thus far responded to the protests much like the president of Haiti’s former colonial ruler, France, where President Emmanuel Macron has sought to disperse the Yellow Vest popular protest movement with police violence. Similarly, Moise has ordered police to shoot tear gas and live ammunition into crowds of unarmed protesters, killing at least four people, including a 14-year-old boywho was not even a part of the protests, and injuring scores more. 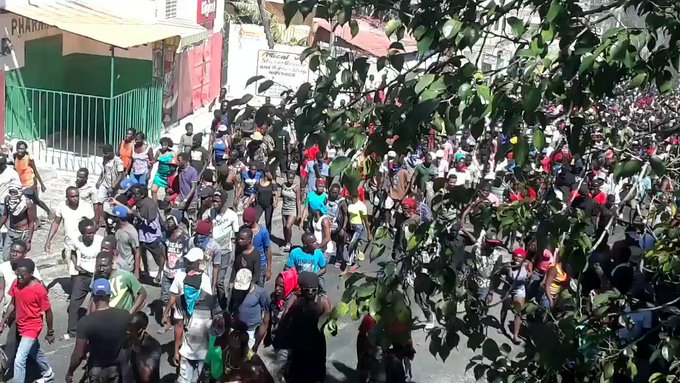 Massive group of protesters making its way from Cite Soleil, Solino, Bèl Air and now up lower Delmas in PAP, #Haiti on this 5th consecutive day of anti-govt corruption protests rocking the country. 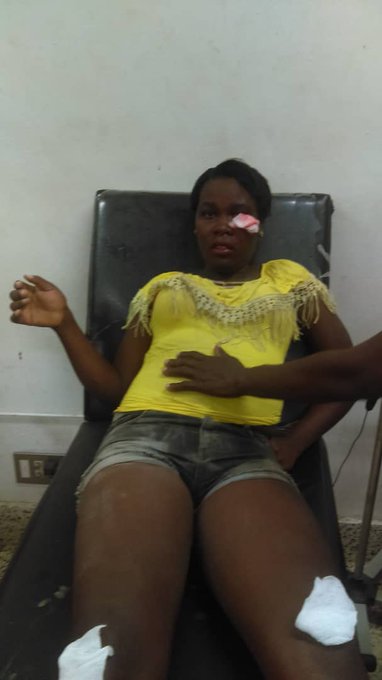 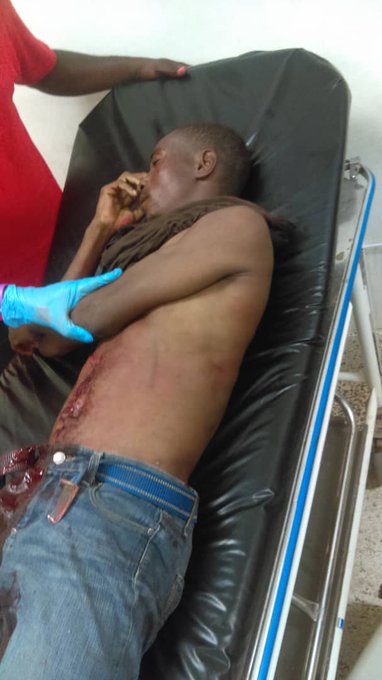 Despite the violent response from the Moise-led government, protesters have continued to come out in force, even stoning Moise’s personal home on Saturday. That same day, Moise declared that he would “clean the streets” of every protester by Monday.

Yet the mass protests continued through Monday, when police were seen standing down in Carrefour (a suburb of Port-au-Prince), no longer willing to fire on protesters. In a video of the incident shared on social media, one female protester yells that “the police are afraid.” Late Monday afternoon, local reports asserted that PHTK ruling elite were evacuated via helicopter from the wealthy enclave of Petionville to the Toussaint L’Ouverture International Airport, apparently planning to flee the country — at least temporarily. Other reports statedthat at least one police officer had been shot during Monday demonstrations that turned violent and saw several businesses looted. 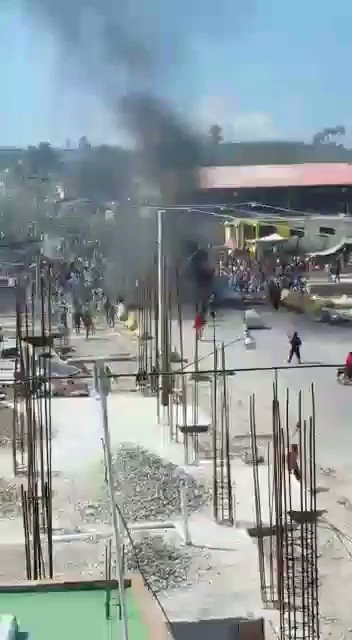 “The police are afraid!”… Police forced to stand down by protesters in Carrefour, PAP, #Haiti this morning. It’s becoming clear the reaction coming today if they open fire. What do you do when protesters are no longer afraid of death?

The international response to the protests in Haiti has been limited, with the UN warning Haitian protesters on Sunday that “in a democracy change must come through the ballot box, and not through violence.” This unintentionally ironic statement ignores the documented meddling of the United States in massaging vote totals and other manipulative tactics in the last two presidential elections. This, combined with the fact that the U.S. has kidnapped and overthrown Jean-Bertrand Aristide, a left-leaning populist politician, each time he won an election — first in 1991 and then in 2004 — has greatly reduced Haitians’ faith in their “democracy.”

The U.S. knows something about election meddling

Since he came to power in February 2017, Moise’s policies have resulted in several mass protests — including last July, when protesters forced Moise’s government to abandon a planned hike in fuel prices; and last November, when protesters demanded Moise’s ouster for the embezzlement of PetroCaribe funds. With so many protests in such a short span of time, the anger among the Haitian population at this unpopular president is pungent and will likely prove difficult to placate this time.

A large part of Moise’s unpopularity is likely related to the fact that he was never popularly elected to begin with. The 2016 election that Moise allegedly won was disorganized and had turn-out so dismal that Moise, the “winner,” received only around 600,000 votes out of a national population of over 11 million. Prominent Haitian politicians called the election an “electoral coup.”

In addition, that election was overseen by Ken Merten, former Obama administration ambassador to Haiti and then Obama’s Haiti Special Coordinator, and was wracked by accusations of vote-buying and -stealing and other fraudulent activities. Merten’s involvement is particularly nefarious given that he oversaw the previous Haiti election (2010) where the U.S. State Department had altered the vote count.

If that were not enough, in addition to the election fraud, Moise was widely believed to have been ineligible for office soon after having been “elected,” after it was revealed that he had laundered money through his personal bank account and was tied to a drug-trafficking operation.

Ultimately, Moise’s unpopular rule is the continuation of that of his predecessor, Michel Martelly, who chose Moise — then a political neophyte — as his successor. Martelly’s rise to power was similar to Moise’s but even more fraudulent. In the 2010 election that saw Martelly “win,” the Hillary Clinton-run State Department changed the vote totals in order to place Martelly in a runoff election for which he hadn’t in fact qualified. When the previous Haitian government resisted, Clinton herself traveled to Haiti and threatened to withdraw all U.S. aid from Haiti if Martelly did not replace the second runoff candidate, Jude Celestin.

After coming to power, it took little time for observers to realize why the U.S., particularly the Clinton-led State Department, had chosen Martelly. Not only was Martelly an avid supporter of neoliberal policies that impoverished his people, he also supported the outright theft of Haitian land by wealthy foreign corporations to create so-called “Free Trade Zones,” and brokered a deal with the Clintons to release Americans who had been arrested for child trafficking.

Furthermore, Martelly also helped squander much of the foreign aid that did make it into Haiti, cementing his reputation as notoriously corrupt, although most of that aid never even made it to Haiti and instead remained in the hands of corrupt foreign contractors.

Martelly’s government included several officials who were connected to the Duvalier dictatorship, including his prime minister, Garry Conille, whose father held a cabinet position in the Duvalier dictatorship. In addition, Conille served with Bill Clinton on the Interim Haiti Recovery Commission and had previously worked as a development manager for the United Nations before receiving his prominent position in the government installed by both the U.S. and the UN.

Thus, Haiti under Martelly and Moise has been little different in practice from the Duvalier era. Indeed, as Amy Wilentz noted in a 2014 article in The Nation, “[The Duvalier] political toolbox — authoritarianism, trumped up elections, distrust of free speech, corruption of the forces of order, and no justice — are the methods by which Haiti’s ruler [Martelly] still controls the country.” With Moise serving as the new face of PHTK and Martelly’s chosen successor, this neo-Duvalier era in Haiti that has largely been orchestrated by the U.S. is now in danger of falling apart.

If the movement to oust the U.S.-backed and illegally installed rulers of Haiti is successful, it could easily send shockwaves through the power structures of the United States and its client states, much as the Haitian revolution did to the colonial powers two centuries ago. Indeed, the Haitian revolution instilled fear in European colonial masters throughout the Americas and the world and inspired countless slave revolts in the United States alone. Today, it still serves as a reminder that the most repressed class of a society can rise up to declare their equality and independence — and win. Perhaps that is why the current oligarchical system has invested so much in robbing Haitians of their economic and political power.

Since 2004, the UN spent BILLIONS in #Haiti to try and pacify the people.

The US spent hundreds of millions in military contracts with DynCorp and others to try and pacify the people.

Today the fire of resistance has not been quelled, but instead has spread even further. 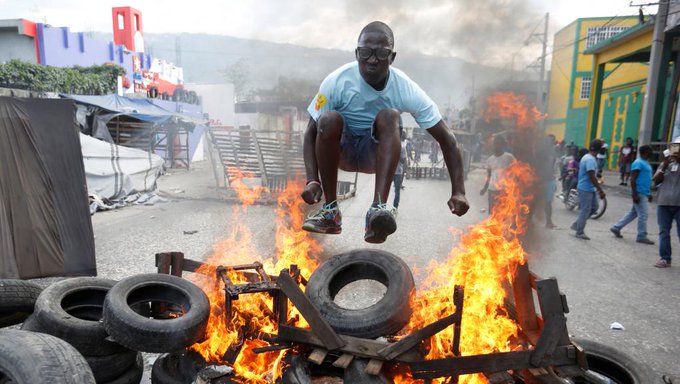 For decades upon decades, they’ve painted #Haiti as a charity case – a people incapable of governing ourselves. But the truth is #Haiti is the epicenter of resistance against colonial / imperial rule, hence the billions upon billions spent to try and quell the fire. pic.twitter.com/SQKMRroGR6 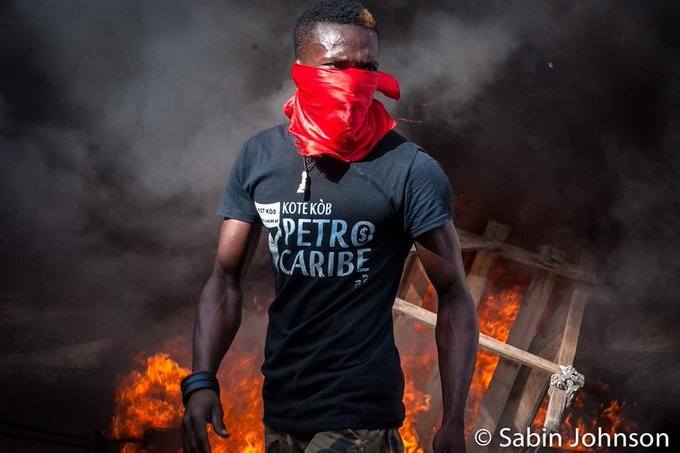 Though today is unlike the late 18th century in the sense that those at the bottom of the rung are no longer called “slaves” and those at the top are no longer called “masters” and “kings,” the record inequality that now exists throughout the world, the U.S. included, has recreated in today’s power structures an ethos eerily similar to that of the feudal-colonial systems of centuries past.

As both Haiti and France have become the new epicenters of popular unrest against predatory elites, much as they were two centuries ago, it is time to see both of these current movements as part of the same struggle for basic human dignity in an era of neocolonialism, imperialism and global oligarchy.

Whitney Webb is a staff writer for MintPress News and has contributed to several other independent, alternative outlets. Her work has appeared on sites such as Global Research, the Ron Paul Institute and 21st Century Wire among others. She also makes guest appearances to discuss politics on radio and television. She currently lives with her family in southern Chile.