Haiti festival seeks to reconnect Jazz back to the people

Like many indicators of black culture, we’ve seen an evolution of Jazz that has led her away from her black roots and closer to the upper echelons of wealth, leaving the depth of her sound to be enjoyed by elite whites, instead of the children of her creators. However for Milena Sandler and Joel Widmaier, Jazz —  a genre that was birthed by black communities across the United States — deserves to be enjoyed by everyone, especially by the masses.

Haiti may be the last place that some expect to find an international Jazz festival, however Sandler and Widmaier have been bringing artists from all over the world to Haiti for the past 13 years.

The PAPJAZZ International Festival, which took place from Jan. 19 – Jan. 26, featured more than 20 artists from Haiti to Sweden, all bringing their take of Jazz to Haitians. Cecile McLorin Salvant, a Grammy-award winning Jazz singer born to a Haitian father and Guadeloupian mother; and Joss Stone, a critically-acclaimed and Grammy-award winning artist from Great Britain, headlined the festival.

For many of the festival-goers PAPJAZZ was their first encounter not only with Jazz, but with the likes of Salvant, who has headlined at Lincoln Center and was featured in the New York Times.

“As much as I’m happy with any audience, I would love to see more diversity,” Salvant said. “Jazz has become this elite music and it’s unfortunate because it’s a music that came from struggle that came from people trying to get beyond their conditions, which were not elite conditions.

“That’s the idea of this festival,”  festival co-organizer Widmaier said. “We don’t want to keep it as elite music.”

In addition to performances by Salvant and Stone, Haitian favorites Paul Beaubrun and Phyllisia Ross also graced the PAPJAZZ festival stage. Anie Alerte made a guest appearance, singing alongside Beaubrun during his rendition of Ayizan.

Although Beaubrun and Ross are not technically Jazz artists, for Sandler and Widmaier, including non-Jazz artists to the lineup is an important strategy in exposing Jazz to Haiti’s youth.

“It’s a mixed lineup because we’re trying to get another crowd [a younger crowd]  to come to enjoy Jazz and discover Jazz,” she said. “So this is how we build the lineup to attract them. If you have BIC at the end, you’ll come, but you’ll also discover the German duet.

“In this way, they get to familiarize themselves with Jazz music.”

While it may seem odd to some to include Kompa and Rasin artists to a Jazz festival, Widmaier contends that PAPJAZZ has the most amount of Jazz artists compared to other festivals in the region.

“All of the Jazz festival in the Caribbean are more  R&B, world music or pop,” Widmaier said. “Sixty-five percent of our festival consists of Jazz artists. Many other festivals include much less than that.

“This festival isn’t about making money,” he said. “It’s about exposing Jazz to a new generation of Haitians.” 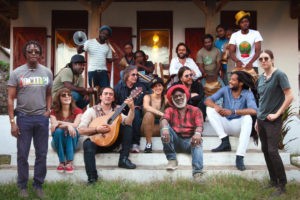 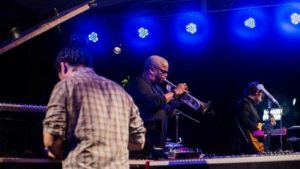