The courtroom was packed Monday in room N6H at the Eastern District of New York Federal Courthouse in Brooklyn as lawyers representing Haitian recipients of Temporary Protected Status (TPS)  battled it out with the Assistant U.S. Attorneys representing President Donald Trump, who wants TPS terminated by July 22, 2019.

The Saget et al v. Trump case that was held on Jan. 7, is the first trial to challenge the government’s termination of TPS, according to a press release.

Social justice groups, Haitian organizations, aid relief groups and some immigration lawyers across the country have agreed that Haiti is a prime candidate for TPS, a legal designation that allows immigrants to work and live in the U.S. because of natural disasters, political strife or humanitarian crises, said Steven Forester, the immigration policy coordinator for the Institute for Justice & Democracy in Haiti.

In. Jan. 12, 2010, a 7.1 magnitude earthquake rocked the island killing approximately 250,000 Haitians. That was followed by was a cholera epidemic brought to Haiti from Nepalese United Nations peacekeeping soldiers 10 months later. As the nation started to slowly recover from the two previous disasters, Hurricane Matthew, a Category 4 storm, hit it on Oct. 4, 2016.

In 2016, 3.2 million Haitians were need in humanitarian assistance, according to UNICEF.

Despite this information, the Department of Homeland Security under the recommendation of the State Department made an announcement to end TPS in November 2017, by arguing that conditions had improved on the island.

Lawyers for the U.S. Attorney’s Office argued that, “98 percent of the displaced persons camps closed in Haiti,” and that of the “38,000 of the 2 million who were living in camps are no longer in them.”

Lawyers from NIPNLG with the law firms of Kurzban, Kurzban, Weinger, Tetzeli and Pratt P.A, (Kurzban) and Mayer Brown argued otherwise at the trial, which started at 9:30 a.m. and ended at 5:30 p.m. by bringing on their experts on the condition of Haiti to the witness stand.

Just as soon as witnesses were introduced to take the stand, lawyers for the U.S. Attorney’s Office motioned to have them dismissed, but ultimately U.S. District Judge William Francis Kuntz for the Eastern District of New York overruled their dismissals, but allowed for cross examinations at a later time.

Lawyers representing TPS-holders accused the Trump administration of cherry picking facts without looking at the situation with a more nuanced approach like expert witness Ellie Happel, the Haiti Project Director of Global Justice Clinic, who has been on the ground on the island from 2011 to 2017 and had issued a report on the country’s condition in the fall of 2017.

“Facts on the ground are complicated,” said Happel. “There is a housing crisis in Haiti.”

Happel said that the U.S. government “has not kept track of people who left [Internally Displaced Persons] and most of those who left the temporary camps were either forced out or are currently living in moderately stable to completely unstable homes with poor infrastructure. Based on her eyewitness account very few Haitians were living in proper homes.

At least 500,000 homes need to be built to replace the ones lost by natural disaster in the country, which is the only one with a major city in the Western Hemisphere without a proper waste management system, according to Happel. To make matters worse, the island also has a water shortage and the part of it that was hit by Hurricane Matthew was a major agriculture hub, which means many Haitians are food insecure.

During Happel’s cross-examination, the lawyers for the U.S. Attorney’s Office questioned the validity of the NYU grad’s level expertise and if she was biased in her assessment.

They called into question her lack of a Ph. D. in economics, international relations, food insecurity, anthropology and political science to invalidate her assessment of the conditions in Haiti. The attorneys also inquired about her $275/hour salary as an expert for the other side.

Happel’s past anti-Trump tweets in 2016 were also subjected to scrutiny to establish partiality in her assessment of Haiti.

Michael Posner, the former Ast. Secretary of State to former Secretary of State Hillary Rodham Clinton was the next witness for the plaintiffs. His expertise in reporting on human rights and conducting country visits and writing reports since the 1970s was presented, and similar to Happel, his partiality was called into question. Especially, since he worked for Trump’s past rival.

Similar to Happel, he stood steadfast in his beliefs that “the decision [to end TPS for Haiti] was highly irregular and wrong.” 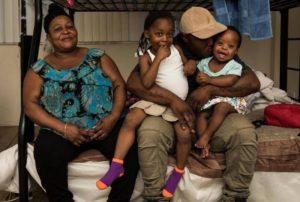