Ben McAdams, the Democratic mayor of Salt Lake County, unseated Representative Mia Love, the first and only black Republican woman in Congress, whose bid for re-election in deep red Utah failed by a narrow margin on Tuesday, according to The Associated Press.

After two drawn-out weeks of vote counting, Mr. McAdams, 43, won with 50.1 percent, or about 700 votes, in the Fourth District, a feat that many viewed as unlikely in a district where fewer than 15 percent of voters are registered Democrats.

With this victory, the Democrats have now picked up 38 House seats in the midterm elections. Three House races have yet to be called — two in New York and one in Georgia.

Ms. Love, 42, had been seen as a rising star in her party even before she was elected to Congress in 2014. She was given a prime speaking spot at the Republican National Convention in 2012, when she had mounted an unsuccessful congressional bid while serving as the mayor of Saratoga Springs, Utah. Her family’s immigration from Haiti was a central theme of her speech.

The election results were a distinct departure from Ms. Love’s re-election in 2016, when she sailed to victory by 13 points. It also underscored the degree to which unease with President Trump is a bipartisan issue in Utah, where his hard-line policies and disdain for decorum has upset liberals and many conservatives whose political attitudes are shaped by the Mormon Church. Mr. Trump won just 45 percent of the vote in Utah in 2016. Continue reading 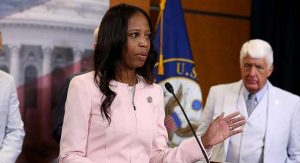