Although there is progress, use of modern contraceptives in Haiti remains stubbornly low. At 31 percent, the country’s unmet need for family planning is among the highest in the world. Continue reading

Two Haitian Boys Are Battling Cancer. 700 Miles May Make All The Difference

Two teenage boys in Haiti have advanced forms of cancer. Both cancers have a high survival rate when the disease is caught early and treated aggressively. Neither boy can be treated at the country’s only hospital dedicated to pediatric cancer — one because he is too old, the other because his cancer is too complicated for the doctors. Continue reading

Haiti and Jamaica each tallied key wins in their Concacaf Nations League qualifiers on Saturday, thanks in large part to goalscoring contributions from MLS attackers. Continue reading

Haitians In France: A First Look Into Their Lives And Community

When Anne-Louise Mesadieu and her family arrived in Chaville in the 1980s, they were among the first Haitians in town. In fact, they were one of the first families of color in a largely white, affluent area southwest of Paris. Continue reading

Haiti’s poor health system is unable to treat most cases of cervical cancer. With only 1 MRI scanner and non-existent radiation treatments, access to the treatment is limited. Reports Radio Television Caraibes Continue reading

The European Union is giving 200,000 euros to assist the victims of the earthquake that happened on October, 6 of 2018, which affected the north of the country. More than 3,000 vulnerable families will benefit from this donation by receiving first aid kits. Reports AlterPresse Continue reading

Deputies of political party Fanmi Lavalas, particularly Deputy Roger Milien of the First district of Port-au-Prince are worried about the violence in the neighborhood of La Saline.

Milien denounces the Minister of Justice of avoiding parliamentarians.
He believes that the goal is to assassinate “Fanmi Lavalas” activists and demands that made. Reports Radio Metropole Continue reading

The Ministry of National Education and Vocational Training announced the creation of a Supervisory Commission for the management of human resources in public schools.

This decision is made to improve the governance of the education sector, particularly in schools.

This Commission should enable the Ministry to:

Students from Jacques Roumain high school in Gros-Morne (Artibonite, North) demonstrated on November 15, 2018. They are asking for the reparation of their school, damaged since the earthquake of October 6, which had affected the mostly North and Artibonite department
Reports AlterPresse. Continue reading 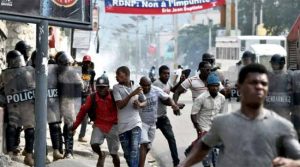