Demonstrators in support of Andrew Gillum in front of the Broward Supervisor of Elections office. Photo Credit: Philippe H. Buteau

The outcome of the election can have a severe impact on the Haitian community in South Florida, which is battling issues tied to immigration and affordable housing.

If elected, Gillum could prove to be an adversary to the Republican-held legislature and an ally to Democrats in the State House and Senate, who support progressive legislation that is inline with issues facing the Haitian community.

Philippe Henold Buteau is a bilingual Haitian journalist in South Florida covering the area and African-American affairs. He believes even as journalists, we have a social responsibility; facts are only biased from someone's perspective. 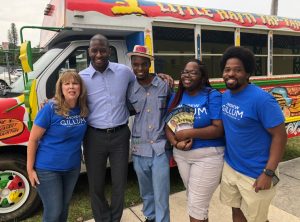