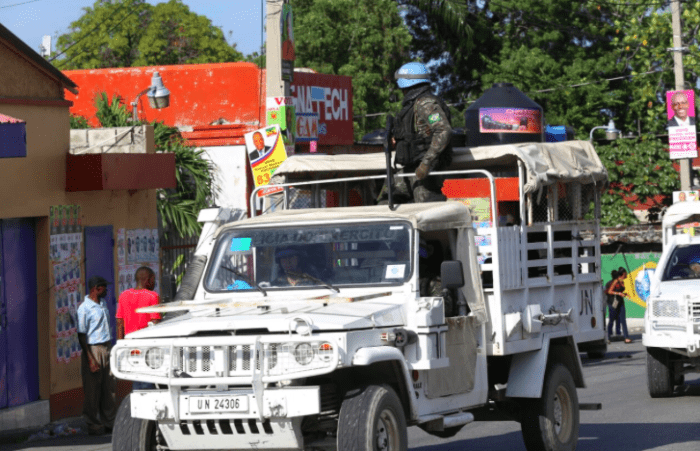 After more than 10 tumultuous years, the United Nations Stabilization Mission in Haiti, is winding down its military component amid “a relatively stable security situation,” UN Secretary-General António Guterres said.

But few are willing to celebrate a foreign intervention – which concludes in October – marked by callous disregard for the local population. And I’m not only speaking of the UN’s introduction of cholera, which has so far killed thousands of people.

With each new exposé, we learn more dumbfounding details about sexual abuse and exploitation committed by UN peacekeepers against Haitian women, men and children during the 13 years of rule by the peacekeeping operation known by its French acronym MINUSTAH.

Last week, the Associated Press published an explosive report with a headline that says it all: UN Peacekeepers: How a Haiti Child Sex Ring was Whitewashed.

In all, the AP reported that some 150 formal allegations of sexual misconduct were lodged against a multinational cast of UN personnel in Haiti from 2004 through 2016.

An inherently flawed reporting system – traumatized victims of UN personnel are directed to report acts of sexual abuse to other UN personnel – helps guarantee that countless victims will stay silent.

But even the victimizers who have been formally accused are mostly getting away with it.

By agreement between Haiti and the United Nations, military personnel operating as UN peacekeepers cannot be criminally prosecuted by the Haitian judicial system. Suspects are referred to the soldier’s home country for investigation and, if necessary, prosecution and imprisonment.

At least military peacekeepers face some semblance of justice.

Not so for non-military personnel — the civilians, experts on mission, contractors, and some police who make up about a fourth of the UN men and women deployed to missions to keep peace and protect civilians. Few people are aware that roughly half of the sexual offenses reported against peacekeepers involve the UN’s non-military personnel.

Under a UN convention from 1946, non-military personnel are granted “functional immunity” – that is, they are immune from any legal process when their “words or deeds” were part of official duties. Yet even when they’re accused of sexual abuse, which could never be regarded as mission-related, the UN habitually refuses to turn them over to the uncertain judicial systems of a country like Haiti.

The only likely avenue for punishment, then, is the UN’s internal administrative procedures – a clear double standard. In all but the rarest of instances, the worst that will happen is that a non-military perpetrator may lose his job.

The new Secretary-General, António Guterres, quickly acknowledged the UN’s crisis and appointed a Task Force to suggest fixes and finally end it.

But the Task Force’s proposals will fail because they dance around the Secretary-General’s fundamental conflict of interest: his UN personnel are still allowed to police themselves.

What is needed is a new and independent judicial body, an investigative court, created and overseen by UN member states, but existing outside the purview of the Secretary-General.

The “special court mechanism” would have intake offices near peacekeeping bases and outposts. It would have a lean staff of investigators, lawyers, and support personnel with the legal authority to conduct independent, bona fide criminal investigations. The court itself would be mobile, activated when needed and on location, enabling victims and perpetrators alike to take part in fair trials and see that justice is being done.

In the case of a non-military UN official accused of a sexual crime, the special court would handle the entire process, collecting and preserving evidence, conducting pre-trial judicial examinations, prosecuting cases while respecting due-process guarantees, and imposing sentences. The judges, female and male, would be appointed by a committee of UN member states applying internationally agreed criteria.

In a country like Haiti, which is justly suspicious of international intrusions, the court would utilize local partners, working with Haitian rights’ advocates, medical professionals, and investigators.

For the truth is, the UN isn’t leaving Haiti.

MINUSTAH will soon be replaced by “MINUJUSTH,” the United Nations Mission for Justice Support in Haiti, made up of nearly 1,300 mostly police personnel. And as before, when it comes to sexual exploitation and abuse, those UN officials will police themselves.

Will justice be served if any of these individuals are accused?

You know the answer.