5 Haitians That Contributed To American History

Black History Month celebrates the contributions blacks made to American development. Take a look below at these five Haitian Americans who made an impact on America’s history.

Jean Baptiste Point du Sable was one of the first permanent residents of Chicago, Illinois and is hailed as the founder of Chicago. Point du Sable was a successful fur and grain trader who established a base in the Great Lakes region of Chicago in the late 1770s. The son of a Haitian father and an African-born slave mother, du Sable was summoned by the British to represent their trading interests with the Indians in Detroit. In 1784, Du Sable returned to Chicago, creating several buildings and infrastructure that steadily flourished into a major trading center. 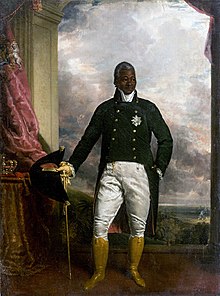 Henri Christophe was an influential Haitian leader who played a significant role in the American Revolution, serving in the French unit in Savannah, Georgia in 1780.  A former slave and key leader in the Haitian Revolution, Christophe was among the five hundred forty-five Haitian free slaves known as the Fontages Legion, fighting for the freedom of men and women in America who desired to be freed from the shackles of oppression.

Pierre Toussaint was a former slave from Haiti who was transported to New York City by his owners in 1787. He later gained his freedom in 1807. Toussaint is acknowledged and respected as one of the leading black New Yorkers of his time. Toussaint later went on to become a philanthropist, delivering charitable services by establishing an orphanage for refugees and offering them employment opportunities. Toussaint also contributed to institution and construction of the St. Patrick’s Old Cathedral, in New York City. Pierre Toussaint was acknowledged as venerable by Pope John Paul II and is highly regarded by the Roman Catholic Archdiocese of New York.

Elizabeth Clarisse Lange, also known as Mother Mary, was a Haitian refugee who fled to Cuba because of the escalating slave rebellion in Haiti. Lange later migrated to Baltimore, Maryland where an influx of French-speaking refugees settled. Although Lange was a refugee, she was educated and recognized there were children of refugees who significantly lacked education. Elizabeth and her friend, Marie Balas had a mission to provide housing to orphans seeking a home and education for children of fugitive and freed slaves.

Rodolphe Lucien Desdunes was a prominent Haitian editor, author, and civil rights activist from New Orleans, Louisiana.  Desdunes is best known for his work in the Plessy v. Ferguson trial, one of the most critical civil rights cases in American history. Desdunes helped form a committee called, Comité des Citoyens (“Citizens Committee”), to combat laws segregating blacks and whites in public spaces. In 1889, Desdunes became the editor of the Crusader, a weekly newspaper created to inform black and Creole leaders of segregation laws and efforts to advocate for equal rights.